While home for the holidays in Nova Scotia, I found a treasure trove: some old, old floppy discs. Not those round ones that look like records but the hard square ones. I brought them back to Calgary and wondered how to get the data off them. Who has a computer with a floppy disc drive anymore? The Calgary Public Library.

I went to the third floor and asked for a floppy disc drive and plugged it into a port. Then I popped the first disc into the drive and it spat and whirred like an ancient engine being turned on for the first time in 100 years. The noise was loud and I was hoping no one was going to “Shhhs” me. It is a library. You’re supposed to be quiet.

I found a lot of photos I had scanned and put on disc in 2003. I also uncovered stories and homework assignments I had written at Ryerson University in 2006. The following is a piece I wrote when I lived in residence only steps away from the core of Toronto. I had a room (that I called The Coffin because it was tiny) in a four bedroom apartment. Each unit in Pitman was designed the same way. I had three roommates (women) and we lived on a co-ed floor. Here’s a vignette from 20 years ago. (Really?)

Noise. A man’s laugh is projected from one bedroom. Haunting pagan music follows from another. The sounds mix and float out of the hallway, pooling in the living room. Sarah and De sit in a circle amidst it, making their own noises.

Sarah’s arm drags across paper. Making a swishing sound as she writes. Bright purple socks sticking out of brown cords and pushed into brown boots is Sarah. De’s making clicking sounds. She’s an interior design student and she’s crouched on the floor and tediously gluing tiny, straight sticks together to make a giant octahedron. Click. She’s gluing the sticks into triangles. Click. She’s building the complex design slowly in case it collapses. De has one leg tucked under her. It’s as if she is trying to create the same symmetry in her design. Sarah walks over to help. Swish. Her cords make a rough noise like her arm on the paper. She sits the same way as De. 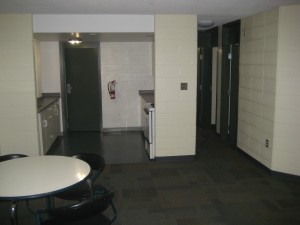 Two shadows are thrown over De and Sarah. The white wall outlines a couple. Two people in a slow dance. The shadows move together and then apart.

Swish. John comes out of the shadows. He’s carrying a plant. “Look,” he says, “it’s real.”

He gives the plant to Maura, who has also come out of the shadows. Bang. John slams the door. Maura takes a seat beside Sarah.

The room fills up with chatter. Talking, talking and talking. The conversation is light and easy. Meringue on lemon pie. Chitchat about classes and octahedrons. Nattering about New York and Chicago. Dirty dishes.

“There is no volume to it.” De mutters to her creation.

Crack. Maura’s knees break as she bends to show De pictures. Her knees sound like octahedron sticks snapping half. But De keeps going with the glue gun. “Psst,” it says. The glue gun wants to tell a secret.

Rustling paper. Sarah returns her focus to her writing. Maura looks out the window. Not much talk now. A few expletives from the glue gun lady. Maybe she’ll shoot someone. Psst, psst and pssssstttt!

Then smooth silence. A few strains of music escape from the room down the hall. Phone rings. Thud. Everyone jumps up. Pattering feet. Who’s it for? The circle is broken. Everyone has left and so must I.

This is a demo store for testing purposes — no orders shall be fulfilled. Dismiss