The cabin along the ski trail. My father still cross-country skis up to it.

In the skiing world, alpine gets all the glory. I love downhill skiing – it’s exciting and thrilling to send yourself down a steep slope while balancing on two planks. I learned in Grade 6 that downhill is awesome and got my own skis for Christmas when I was 16. The downside of downhill? It costs a lot.

Cross-country skiing is cheaper, especially when you strap on your skis right at your driveway and then glide away — like I did growing up.

As I’ve written before, as a youngster I lived in the Nova Scotia countryside. There was hardly anyone around and the snow fell for days – creating perfect cross-country ski conditions.

My sisters and I got our first nordic skis when I was around eight. The skis were little red plastic things that we learned on. Later we upgraded to wooden skis made in Germany — East Germany, that is. The Berlin Wall was still standing back then.

My whole family used to put on our skis at the driveway and head down the snowy road to an old logging trail cut deep into the woods. Usually we had to make our own trail but sometimes a snow machine had been through before us and packed down the path. Entering the forest we first had to climb a steep hill. It would eventually level off and become a beautiful straight stretch that went for about a kilometre.

Being in the forest was enchanting. The trees formed an arch over us and it felt like any minute we would come upon a castle or some fairyland creature. Instead, a cabin in the woods would have to do. 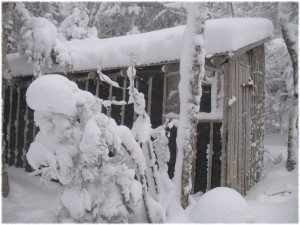 The stable on the ski trail in the midst of winter.

The cottage was halfway up the trail. It was an ancient woodcutter’s cabin and across from it was a small stable, still filled with hay. The one-room cabin had space for a wood stove, a table and two benches. It was pretty sturdy after many years of neglect and the windows still had glass panes. The stable could hold two horses and the outside was covered in black tar paper. I always hoped to open the door of the barn and see a deer or bobcat bedded down on the straw.

We visited the hut a lot during the winters. It’s where we’d always stop for a break and mum would dig out the hot chocolate and peanut butter sandwiches from her backpack. There were actually some condiments in the hut, probably left by hunters, but we never helped ourselves.

When I was older my friends and I would ski up to the site. In the summer, we would hike in and even camped there once, in the small clearing near the cottage amidst the stars.

The cabin and stable haven’t fared well over the past 15 years. More and more people know about the ski trail and when there isn’t snow it’s used for cross-country cycling. The inside of the storybook cottage has been pulled apart. The stove is no longer there and the glass in the windows is missing. It’s only a matter of time before the forest reaches around the cottage and pulls it down. But it’ll always be built in my memory.