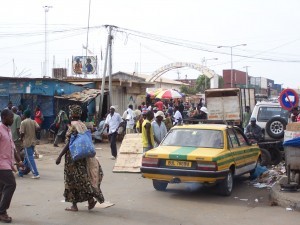 A market in Gambia. The yellow car with green stripes is a taxi.

Ghosts are real. I know because one haunts me. He doesn’t just appear at night – he comes anytime, anywhere. This ghost is not a fanciful wisp residing in my brain, this ghost is real. I’ve seen him. In the flesh.

I went to West Africa, along with a woman from New Brunswick, to work as an intern at a non-governmental organization (NGO) in The Gambia. This was several years ago when I was around 24 years old. Before this experience I thought I was going to change the world. I was going to make a difference. However, throughout my time as a publications officer recording human rights violations on the continent, I realized the planet was set on staying the same. Humans like the status quo.

Gambia is sub-Sahara and sand is everywhere. Peanuts, what they call ground nuts, thrive there as well as palm oil from the abundant leafy trees. Temperatures and humidity are high and sweat rolled down me from all directions. Gambia is poor, very poor, but there are a few rich, extremely rich, people. It’s evident in the large sprawling compounds built next to families living amongst their chickens.

Most people are friendly. Some, mostly men, too much so. They thought my roommate and I were in the country for a different reason. (There’s a booming market for sex tourism catering to Europeans women.) After a month living in Fajara, we went from polite Canadians to rudely snapping, “Go away!” in Wolof. I got good at tuning out the voices of passersby or those sitting by the side of the road calling to us. I became such an expert at ignoring people in the street that a friend had to tap me on the shoulder to get my attention. He had said hello to me three times. My ears had blocked his greetings and I was ashamed.

Travelling opens your eyes but it can also close your mind. No one talks about that. They only talk about the good, the positive, which is great but not realistic. Why can’t we have authentic discussions about the good and the bad? In Gambia I got used to some people asking me for things, wanting things, begging, stretching out their hands and asking, “Give me money.” I walked by. Not hearing.

In the middle of my several month term we were invited to a conference in Dakar, Senegal. Travel! Cool. (Or I should say, scorching.) We were driven from Gambia to Senegal in an SUV piloted by the NGO’s competent driver. He stopped in a busy and dusty Senegalese town a few hours into the trip. I can’t remember why: maybe for a bathroom break or for gas. He parked near a market where hundreds of people and booths packed the sandy street. It was hot, too hot. The sun was bright, too bright. It was noisy at the bazaar, too noisy.

The man saw me.

The man couldn’t walk. He didn’t have a wheelchair or even a cane. He wiggled over to my window by moving his hips side to side in the dirt. It must not have been comfortable. It must not have been easy. It was a struggle. He made it the two metres to my side of the SUV and lifted up his hand to me. Said something I couldn’t hear. I refused to hear. It was nothing I haven’t heard before. 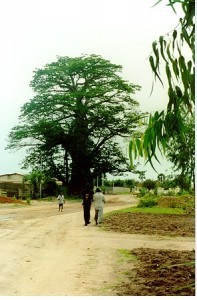 A baobab tree in Kololi, Gambia.

Our driver got in the vehicle and drove off. Leaving the man amidst the busy market. Where everyone got on with their business.

I don’t know. I’ve rationalized it: if I gave something to everyone then they’d expect it from others who come after me; I would have gone broke if I had to shell out money to everyone looking for a handout, or something along those lines. I still don’t have an answer.

I do know that this man changed my world. One man. His ghost comes to remind me that change starts with me. That listening to people and hearing them is what matters. That ignorance is not bliss. That no matter where in the world you are – you can make a difference.

This is a demo store for testing purposes — no orders shall be fulfilled. Dismiss