Trying on cowpoke boots and hats in Nashville.

I headed south last week with a group of Calgary friends. We didn’t go to Mexico or Florida or the Caribbean. We went to Nashville, Tennessee — the first time for all of us — where we listened to some music, did some dancing and heard some interesting stories from the past (and created some new ones too).

Nashville is known as the capital of country music and it’s also the birthplace of its country cousin, bluegrass. Bill Monroe, Earl Scruggs, Lester Flatt, Chubby Wise and Howard Watts popularized the American roots music in the mid-1940s. The genre supposedly got the name from the four musicians who formed a band called Blue Grass Boys.

One bluegrass song I know is Cripple Creek. We had to sing it in music class while at Gaspereau Elementary in Nova Scotia. I don’t remember the following verse being included in the lyrics.

Things weren’t as strict in school in the 1980s but I don’t think any parent wants his/her child trilling about being half-cut.

Printers Alley is a little side street in downtown Nashville. It doesn’t look like much but it’s full of alcoves with doors set in them that lead to adventure. In the 1800s, the area was home to newspapers, print shops and publishers. When the printing presses weren’t in use, the workers would meet in the street and the alley became a meeting place. 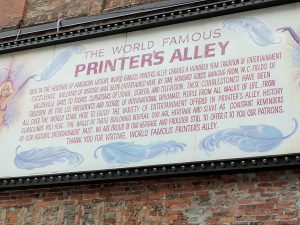 In the 1940s, Printers Alley turned into a mecca for liquor (when the sale of booze was prohibited) and entertainment. Today you can buy wine or vodka or have a pop and catch up with friends, like I did with a buddy from Nova Scotia who lives in Tennessee. He filled me in on what’s happening with his family as well as former university schoolmates who I haven’t thought about in years.

Food is always a big part of a trip. I tried grits for the first time. Gone with the Wind is one of my favourite books and Scarlett and co. ate a lot of stuff I had never heard of before. Collards, salt pork, hominy and grits are part of Southern Cuisine. Before having grits at Biscuit Love (where we had to stand in line for about 45 minutes), I thought grits were fried lumps of dough. They are not. They’re like porridge made from cornmeal. I think the fried lumps would have been tastier. My grits had cheese in them and I didn’t like the slightly salty flavour and the coarse texture. The biscuits, however, were amazing.

The Honky Tonk Pub Crawl took us to historical spots with historical stories (as well as a shot or two). We were regaled with tales about musical legends, pioneers, brothels and visited a haunted bar where a man (it might have been a woman) may have been pushed out of a top floor window by a ghost (or rum vapours?) Nobody knows.

I know that my time in Nashville is now the stuff of legends. My friends and I have good memories of the place and will laugh about the good and the bad and the Southern for years to come.