A summer snow storm hit Calgary this past week. It wasn’t the pretty pre-Christmas snow that covers up all the dead leaves on the ground and causes kids to rush out to play. No, this was an ugly, messy, very, very cold and very unwanted first week of September snow. Not good at all.

Since all the leaves are still on the trees, the falling snow took many branches along for the ride to the ground. The heavy, wet snow piled up and up and up amongst the green foliage until they went down. All night and day the snap and crackle of the trees could be heard, along with the eventual whoosh of an avalanche of snow and leaves hitting the earth. Now in the sunny aftermath days later, it’s the chainsaws that are making the noise.

City crews and private companies are clearing away the hundreds of pieces of debris strewn across power lines, streets, sidewalks and countless yards. The jagged-edge whir of the chainsaw can be heard just about everywhere above the din of the vehicles and sirens that are usually part of the inner-city babble. The chainsaw sound is more at home in rural areas and I remember it well. 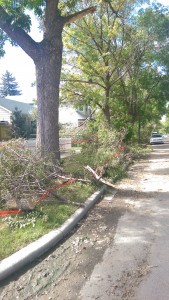 Piles of downed branches. Scenes like this are repeated on many Calgary streets.

My parents used and still use, wood to heat their large two-storey house in Nova Scotia. Evenings were always comfy and cozy beside the wood stove but mornings were another matter. They were cold. On weekdays dad would get up first and get the stove going. On weekends it was us kids who were up first. And freezing. We learned at a young age how to coax the embers of the fire back into a flame strong enough to burn the logs.

In the middle of summer cords of wood would be delivered to our home in the country and stacked on our front lawn. Dad would get out his chainsaw and cut the logs up and throw them into a pile. A pile to be chopped and then in the fall, trucked into our two-car garage. (The garage has never been used for vehicles. Only wood.) When I write “trucked” I actually mean wheel-barrowed in by me and my family: my dad, mom and two sisters.

Later in my teen years I started really liking piling wood. It was exercise and something to do outside when the weather was too chilly for a bicycle ride. As well, teenage years are full of change and piling wood was one thing that always stayed the same. Plus, it didn’t call for a fashion-forward wardrobe.

The wood stove in the house I grew up in.

Thanksgiving Day was always the best day for wood piling. Usually this would be the last push to get all the logs needed for winter under the shelter of a roof. We’d start in the morning in the weak sunshine. It was cold but there would be no snow on the ground yet. By mid-afternoon the smell of turkey and pumpkin pie cooking in the oven would waft through the garage door from the kitchen. That would be our reward after a satisfying and good day’s work.

Thanksgiving is several weeks away and winter is supposed to be months away. Since it’s still summer, we’re supposed to be eating ice cream and watermelon and enjoying the last of this season’s rays. Not eating pumpkin pie and shovelling snow. Oh well. Has anyone found any pumpkin ice cream?