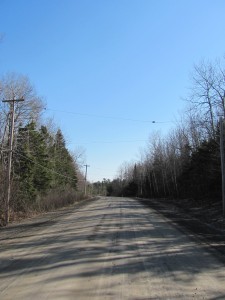 Road to my home as well as the owl and spring peepers.

Sounds bring back memories for me and most likely, for a lot of others too. Noise, or lack of noise, connects us to a myriad of flashbacks from happy to sad to scared to whatever you heard and felt at a particular moment. While I was home in Nova Scotia last week the outdoors resonated in my brain and trigged reflections.

Research on linking sounds and memories is being done by the National Institute of Neuroscience in Turin, Italy. Scientists discovered a particular sound, attached to emotional information, ends up being grouped together in the brain as a bundle. The sound paired with the feeling gives it emotional meaning. (This happens with smells too.)

I don’t give this much thought when I’m listening to the wind blow through the trees at home. The window in my bedroom is left open a crack even in the chilly April night so I can listen to the air moving in and out of the woods. The breeze whispers at first and then gusts into a roar that lasts a moment or two on this particular night. It’s a strong sound, one that resembles a vast rushing river. A river in the sky.

When I was younger the wind might last for hours, lashing the house. Pelting snow and ice at us in winter or rain and lightning bolts in the summer. But I was safe. Cozy and warm at home while the tempest took out its anger on the earth.

Another sound that sparks memories is the hoot of an owl. Looking for prey maybe? The bird wakes me out of a deep slumber to say goodnight. Not the same owl as many years ago but the same call to sleep.

Since its spring, the peepers are out. The tree frogs sing for their mates and the cacophony ends up creating a symphony. The sound has marked years of winter’s ends for me. I’ve not only heard the peepers in Nova Scotia but the Northwest Territories, British Columbia and Alberta too. Each place has its own set of memories but they all started as a bundle from home.

You cab hear the spring peepers by clicking here.