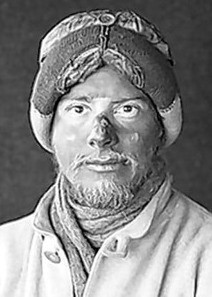 Apsley Cherry-Garrard was 24 when he joined Scott’s second expedition to Antarctica. Photo: http://www.thisiscornwall.co.uk

Every night I get into bed in the Antarctic. No, it’s not some kind of teleportation trick and it’s not that cold in Calgary yet. I’ve been reading The Worst Journey in the World, by Apsley Cherry-Garrard. Cherry-Garrard was part of a British expedition team that travelled to the South Pole in the early 1900s. His non-fiction book was created from journals he had written, along with the memoirs of other team members, and I find it fascinating.

Long before my hands were frostbitten, or indeed anything but cold, which was of course a normal thing, the matter inside these big blisters, which rose all down my fingers with only a skin between them, was frozen into ice. To handle the cooking gear or the food bags was agony; to start the primus (cook stove) was worse; and when, one day, I was able to prick six or seven of the blisters after supper and let the liquid matter out, the relief was very great. Every night after that I treated such others as were ready in the same way until they gradually disappeared. Sometimes it was difficult not to howl.

Excerpt: The Worst Journey in the World by Apsley Cherry-Garrard

Cherry-Garrard survived the ice and the snow and other extreme conditions while the leader of the group and four other men died. It was a disastrous adventure and they weren’t prepared, especially as there was pressure on the expedition captain Robert Falcon Scott to reach the South Pole first, before Norwegian explorer Roald Amundsen. It didn’t happen.

What does happen in the book are vivid descriptions of the sail to New Zealand and then to Antarctica – amid hot weather, cold weather and storms. Trying to protect the ponies and dogs they brought on board from searing heat or icy waves (even though some animals were washed overboard in squalls) while keeping them healthy in the tiny stalls on the ship. Once off the boat at the south, the crew hopscotched over ice floes, making sure no one or nothing was eaten by orcas that smashed their way through the ice for an easy meal.

The men grappled with the worst weather possible – and not in technical, sweat-wicking gear either. They did hard, physical labour for two years without the comfort of going home and relaxing after a solid day’s work. They hiked long distances in the cold while pulling and pushing heavy sledges and trying to avoid falling into crevasses. In the beginning the dogs and horses did much of the work but the animals started dying. Some because they couldn’t take the polar chill and some because they were weak. One horse was lost when a crack appeared in the sea ice underneath his stall in the stable. He simply disappeared into the black void.

His name had been Guts and I was devastated when I read he was gone. I felt a personal connection to him because I had a Guts once, my bicycle. I thought I was being original in 1994 when I called him that. He got the handle because he took all my guts to get up the big hills around home in Nova Scotia. Thankfully, my Guts is still here and my father gets to take him out around the valley now.

I liked the book before I read about Guts the horse. I’m only part-way through the book now. It was hard to get into at first because there are lots of names and it gets confusing. The other thing is, I wish they had included a timeline with the people who went on the different missions. I’m a bit mixed up about who goes where, at what time and why. Otherwise, it’s a great read and I look forward to heading to the Antarctic each night.